So much bookishness has happened with me in the month of October. I was sitting here staring blankly at my computer today, struggling to pull a little bit of write-spiration to the surface, when it hit me… You know, I could probably get away with taking the last two days of this month off because after all, it’s likely been the best bookish month I’ve had all year!!

First off, every single one of the books I’ve read and reviewed have been Fantastic!  So much so that I’ve given the last five books on my read-roster either a 4 or 5 star review, and the last three have all been FIVES!  I think this is some kind of record. Insanity! This never happens, it’s been an excellent reading month, if you want to check out the reviews here they all are:

The month of October also brought about so many milestones, celebrations, and collaborations!  Far more than any other month in 2017(yet).

I did my very first guest post. It was on the When Women Inspire Blog, and it turned out fantastic! I was able to talk about motherhood, which is my favorite subject there is, period. Change of Seasons: Coping as a Mother (Guest Post)

Also, as most of you may know I released my latest novel Search For Maylee!!  I’m so damn excited about this still!  The official release date was Oct. 6th. Since then I’ve had a Blog Tour with several stops hosted by Reads & Reels,(check out all of the reviews in the tour by clicking on the R&R link!) Along with a few interviews!!

As far as milestones go, I’ve had a couple of BIG ones!!!  Not only did I reach the 1000 followers mark here on the blog, but I’ve also reached my one year Blogiversary!

Lastly, but most definitely not least(ly??) lol… I have marked one of my books down on price for most of the month. Because it’s the scariest month of the year here in the U.S. and we celebrate all things awful tomorrow on Halloween. The psychological thriller that I released last year, Aggravated Momentum, has been marked down to 99 cents!  If you haven’t grabbed your copy, then you may want to do so because tomorrow is the last day of the sale! 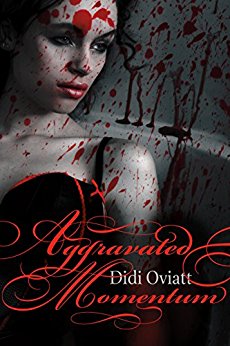 WHEW!! I think that’s it, my October in a nutshell… For some reason I feel like I’m leaving something out. Of course. Hopefully I got it all though!  So here’s to an excellent month for everything bookish in my world. May there by many more, just as phenomenal!  Although, I have a feeling it’s going to be hard to top!