I’m a little late posting my writing challenge scene, but no one joined in this month anyways and, well, it’s my own challenge sooooooo…… not only am I late, but I’m doing creepy scene instead of a festive one despite the holiday spirit. I have more than one projects going on right now. So far I’ve used the characters from New Age Lamians, Book 2 (my top priority WIP as of late) to write my monthly scene challenge for Sept. I’ve also used a previously published book for last month’s challenge ‘bump in the night’.

For the past week I’ve been doing a final round of revisions on my soon to be new release SKETCH! It’s a rendition of the first book I ever wrote The Stix. The Stix was stolen from me from a very shady publisher. The story is fantastic, but not nearly as polished over as it should’ve been before publication. This “publishing company” took it and won’t pay me proceeds, nor will they release the book or let me update it. If you’re intrigued by the scene, then please don’t buy The Stix, just WAIT FOR SKETCH. It’ll be worth the wait, and quite possibly my best thriller yet!

Anyhow, in light of this week’s progress I’ve decided to take a scene out of the story, and mold it to fit my theme for Nov. ‘An Awhaw Moment Amidst Chaos’.

IF YOU’RE YET TO CHECK OUT MY MONTHLY WIP CHALLENGE THEN PLEASE DO, ITS A FUN WAY TO INTRODUCE THE CHARACTERS FROM YOUR WORK’S IN PROGRESS IN A SCENE/SHORT STORY PROMPT. 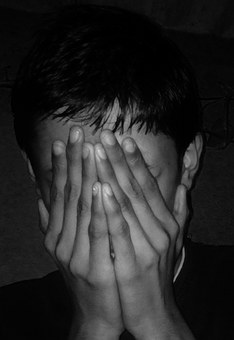 Steven drags his feet through the front door of his father’s house. He takes off his shoes and passes out on the couch right inside the doorway. He’s too tired to walk the short distance into his room and doesn’t much care about the growl in his stomach. The thoughts of Misty’s body have been weighing him down. He’s still utterly nauseated from everything he witnessed, and that’s not to mention the smell. The scent of so much blood and a freshly decaying body isn’t something Steven will soon forget.

It was a smell so strong he could taste it. He felt like he’d been breathing in the stench for weeks. No matter how many times he brushed his teeth upon returning home the night before, he still couldn’t seem to get the taste out of his mouth. It was overwhelming. He was drenched in her blood from head to toe. Steven couldn’t understand how any human being could do such a thing to another. What kind of sick and twisted person could cut someone up into pieces?

When Steven laid in bed the night before he couldn’t sleep. All he could think about was how he had to lay out Misty’s body like a puzzle. Making sure every piece was there. He watched them set her fingers in place, in the order they guessed they would be. He watched them lay her toes next to her feet. Every part of her body was there, in place and accounted for, aside from one toe. He’d helped them search the bunker until it was completely dark and they were all too exhausted to keep going. They’d felt around in the pools of sticky coagulating blood. They moved around the bones and rotted flesh of the old body that had obviously been there for years. There was no toe to be found.

After having absolutely no sleep all night, and then going out to do all of the Hounds brother’s work this morning, his body finally just gave out. Steven doesn’t move from his spot on the couch for hours. He’s in a deep and much needed sleep. Upon waking, he opens his eyes briefly to see his father sitting on a chair next to him reading a newspaper as he did every morning before going to work. Steven wonders what time it is. It has to be in the afternoon, and Dad should be at work, he thinks.  He’s too tired to give it any more thought, and he drifts back off.

When Steven finally opens his eyes completely, he looks over to see his father still sitting in the same seat.

He hasn’t spoken to his father since the day before when he and Chloe found the trail that lead to Misty. Steven had pushed the image of his father out of his head as soon as the lawmen showed up in the woods. Helping with Misty’s remains took over his mind completely, and until this very moment he’d forgotten about his father’s odd behavior.

“I’m fine son,” his voice is short and gruff.

Steven sits up and turns his body at an angle to get a closer look at his father’s blank stare. Again, there’s an icy glare in his eyes. Steven wonders how long his father has been sitting in this same spot with this contemplating look on his face.

“What time is it dad?” Steven asks, slowing his words even more.

“Did you know I am going to lose this house?” Mr. Smith responds to Steven speaking, but not with the answer to his question, and with flat unemotional voice. “It’s all right there, look.” Mr. Smith points to a piece of pink paper. Its setting on a miniature coffee table between the two of them. “The store hasn’t been able to pay me enough for months. This damn depression is eating us all alive.”

Steven picks up the page and reads. The legal document is from the bank and addressed to one Robert Smith. It states that the resident has one month to vacate the property or they will take all the possessions inside as well as the house. The document is dated effective as of three days prior. Steven sits still, frozen in place. This would have been given to his father they day before Misty was taken and murdered in the woods. Could my dad possibly have anything to do with this? Steven asks himself.

I’ll be posting December’s challenge tomorrow (which will likely be more festive lol). Thanks for reading through, and CLICK HERE for all the official guidelines of my monthly WIP character monthly writing challenge!