I signed up to join in a cover reveal blog post for James J. Cudney’s 6th book in the Braxton Campus Mysteries series. It’ll be released soon enough, and in jumping on board I almost cried to think that I’ve let myself get so far behind!  I love everything that I’ve read by this author so far, and there is really no excuse to my slacking off.

So, a mere two days ago, I picked up book four, exactly where I left off on the Wharton County happenings, and this morning I breezed right through to the finish. I couldn’t put it down, and as I devoured the very last pages it dawned on me that this could likely be my favorite ending so far! I thought I had it all figured out, but I was wrong. Talk about an unexpected climax!  Whoa, has James J. Cudney’s writing really kicked up the suspense aspect a notch(or ten). This cozy series is climbing to thrill ride extravaganza, way to execute a twist to be remembered, Mr. Cudney!

Mistaken Identity Crisis is a fairly short book, a bit smaller than some of the others, so it can easily be read a minimal amount of sittings, one even if you have the freedom in time. It’s been months since I finished book three, yet as soon as I cracked this one open, that feeling of familiarity took over. A part of me actually felt like I was right at home in Wharton County, surrounded by friends and family that I’ve known all my life.

Kellan, the main man is his usual calm, collected, and genius self. In the face of everything deadly and chaotic, he manages to keep a steady head on his shoulders, and his best judgement in play. Emma, his daughter, is the same little sweetheart as always, ever the fun loving smarty pants herself. Nana D. is still my favorite old lady, full of grit and sarcasm, only now she’s inaguarated and at the ripe young age of 75 she gets to pull the strings of Wharton county as none other than the mayor. Which we knew was coming as she ran the race in book 3. Kellan’s family makes you raise an eyebrow in question, for one reason or another, just as in every other book, yet you just love them! AND, his mobster inlaws are at their mob(ish) finest… or not so finest, all figures of speeches aside.

The lingering mystery that is Kellan’s supposedly late wife, who isn’t really dead, has always been hovering over Kellan and Emma’s head like a plague, and in Mistaken Identity Crisis everything about her and the Castigliano’s is finally brought to light. Talk about unexpected twists and turns there! There is never a dull moment in this family, and Kellan has done the right thing to protect his daughter from them as much as possible all the while walking the fine line of danger within all because of the blood running through her veins. Kellan is such a great dad, it’s one of my favorite aspects of this entire series!

What’s amazing is that not only is Kellan dealing with the stress and blackmail of his in laws, along with their lifelong enemy mob family, but there’s also been another murder on campus. A strangulation made look like electrocution nonetheless. Kellan finds himself right in the middle of the investigation once again, as he’d made friends with the man killed, AND because his brother Gabriel may just have connections to the whole mess…. BUT, is everything it really as it seems?

Once again, there are SO many aspects and clues into play that no regular mind could possibly keep it straight. Lucky Kellan has a knack for sorting clues, and finding anything looked over in the chaos. One piece at the time the puzzle comes together, and in the exact right places throughout the story. Then the ending happens… it’s as if the entire book just jumps from your fingertips and slaps you across the face before screaming, “I got the best of you again, you fool!” The ending is brilliant, and it ties literally every single piece of the story together. Hands down five stars. Yet again. I’ll be reading book 5 next week!

A clever thief with a sinister calling card has invaded Braxton campus.

Meanwhile, a string of jewelry thefts, remarkably similar to an unsolved eight-year-old-case, is taking place in town. When a body is discovered at the campus, Kellan is called in to investigate.

And if the latest murder isn’t enough to keep him busy, Kellan partners with April to end the Castigliano and Vargas crime family feud. As the summer heat begins to settle in Wharton County, what other surprises are in store? 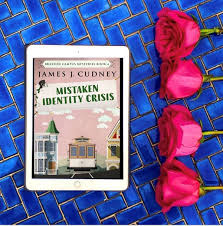 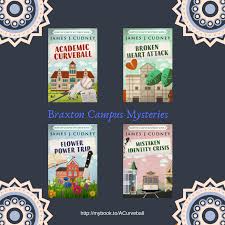