To be honest right out the gate, this review is going to suck. I skipped and skimmed a lot of this book as I just couldn’t get into it enough to read slowly and in depth… which was probably a dumb thing to do because so far in this series, King has really sprinkled a lot of foreshadowing details literally everywhere. I probably missed a lot!

Because I couldn’t get supper sucked in and really struggled picturing so many scenes, I really only wanted to give it three stars. On the other hand – because I totally just confessed to skimming – I’m going to give it an extra point five out of… what would you call it? Pitty? Apology? A sense of hope for the future of the series, pared with the feeling that it’s had a great build up to something inevitably spectacular?

If you’ve read my reviews of the first two books in the series, you know that I wasn’t extremely fond of them either, yet for some reason I just keep trucking along. It’s unique, and intense, and so completely different from anything else that I’ve ever read. I just can’t help but to keep going, and I intend to. I’ve already bought a paperback of book four, so I’m invested. I’ve also become oddly attached to the characters. So, I seriously can’t tell if I’m curious to know what happens to them or if I do indeed actually care about them.

Roland, the gunslinger and the main guy from the very beginning showed a different side to himself in this book. The once fairly bland guy, apparently has a bit more depth to him, and because Jake – an old character from book one, returned – pulls to the surface a certain side of regular human compassion in Roland. I really enjoyed Jake in book one, so I was thrilled for his return!

Also, Eddie and Susannah – who came into the story in book 2 – have developed a relationship here in this book. I enjoyed their connection, it feels genuine. Especially when in danger from ancient mechanical beasts and even demons, the two are truly a team. There’s also a camaraderie with Eddie and Jake which is fascinating.

The new characters introduced are Oy, and Blaine. Oy is great, lots of personality. It’ll be interesting to see what happens with him. Blaine is tricky. He’s actually a train… a very demented riddling train. One that is sure to be reckoned with as we go into the fourth book! All in all, I’m sticking with ‘unique’ as the best word so sum up this book. I have high hopes moving forward! 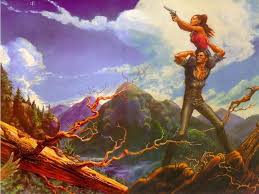 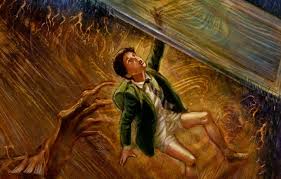 On the plus side, the eddition I read had some pretty cool pictures!!

The third volume in the #1 nationally bestselling Dark Tower Series, involving the enigmatic Roland (the last gunfighter) and his ongoing quest for the Dark Tower, is “Stephen King at his best” (School Library Journal).

Several months have passed since The Drawing of the Three, and in The Waste Lands, Roland’s two new tet-mates have become trained gunslingers. Eddie Dean has given up heroin, and Odetta’s two selves have joined, becoming the stronger and more balanced personality of Susannah Dean. But Roland altered ka by saving the life of Jake Chambers, a boy who—in Roland’s world—has already died. Now Roland and Jake exist in different worlds, but they are joined by the same madness: the paradox of double memories. Roland, Susannah, and Eddie must draw Jake into Mid-World and then follow the Path of the Beam all the way to the Dark Tower. There are new evils…new dangers to threaten Roland’s little band in the devastated city of Lud and the surrounding wastelands, as well as horrific confrontations with Blaine the Mono, the piratical Gasher, and the frightening Tick-Tock Man.

The Dark Tower Series continues to show Stephen King as a master of his craft. What lands, what peoples has he visited that are so unreachable to us except in the pages of his incredible books? Now Roland’s strange odyssey continues. The Waste Lands follows The Gunslinger and The Drawing of the Three as the third volume in what may be the most extraordinary and imaginative cycle of tales in the English language.